Another year, another spectacular string of submissions by Malaysia’s architecture and civil engineering students vying for the top prize in one of arguably the most prestigious competitions of the like in the country. With the aim to integrate the bond between design and construction amongst undergraduate students in the fields of architecture and civil engineering, this year’s Open Ideas Competition (OIC) was once again brought about as a result of the strong commitment and arduous effort by both MSSA and CIDB in order to make the event a success.

The annual OIC Prize Award Ceremony was held at the prestigious Malaysia International Trade and Exhibition Centre (MITEC) on the 20th of March 2019 in order to commemorate the success of the young contenders. The event was duly officiated by none other than the MSSA President himself, YBhg Dato’ Sri Ir Roslan bin Md Taha, in the presence of Prof Dr. Azlan Adnan as the Chairman of the OIC Committee, YBhg Dato’ Ir Ahmad Asri bin Abdul Hamid as the Chief Executive of CIDB, deans of the participating universities’ architectural and engineering departments, members of the Education Committee of MSSA, judges, supervisors of the OIC, as well as the celebrated undergraduate top finalists of the competition.

The ceremony began with a heartfelt opening speech by the President of MSSA who truly believed that students play a fundamental role in molding the evolving lifestyle of the nation through structural designs, especially as it is inevitable that these students are the future of the developing country themselves. Citing structural steel as his main focus, YBhg Dato’ Sri Ir Roslan bin Md Taha called upon his professional peers to, “… recognise, harness, and work hand-in-hand with the young and fresh new minds in an effort to feed the rapid evolvement and growth of the construction industry.” Apart from that, he also applauded the student contenders for their strenuous effort and hoped that the students gained invaluable insights and experiences that would last them a lifetime. The highest of gratitude was also acknowledged to the deans and supervisors of participating universities, as well as to the main sponsors of the OIC, namely CIDB Malaysia, AME Engineering Industries Sdn. Bhd., Bina Puri Holdings Berhad, Ann Yak Siong Hardware Sd. Bhd., and Melaju Jaya Corp. Sdn. Bhd., without which the competition would not have been as successful as it proudly was.

Highlighting steel as its main structural material, this year’s competition centred around the theme of Regional Airport Terminal which aimed at challenging students to come up with a steel structure that is unique in character with high-tech and innovative construction solutions. With this year’s theme revolving around recreating existing regional airport terminals in order to facilitate the expanding number of passengers brought in by low cost carrier airlines such as AirAsia, the competition seeks the most cost-effective design structure that does not compromise on its feasibility. 12 universities took part in this esteemed competition involving a total of excited 335 students and their accommodating 35 supervisors. Before collectively taking home a whopping total of RM28, 000 in cash courtesy of the sponsors mentioned, the Top 5 Finalists of this year’s OIC event had gone through three very demanding stages; selection by their respective universities, shortlisting by a panel of external judges, and the final judgment.

As expected, anticipation ran high in the hall and not a seat was dry as the contending students as well as those in attendance bated their breaths before the results were announced. The hall erupted into cheers of victory as Team RT 0048 from Universiti Teknologi Malaysia (“UTM”) was crowned the highly sought-after title of the 12th champion of the OIC 2019. Taking inspiration from the traditional Malay cultural identity by using vernacular architecture representing a traditional house, the winning team’s reimagined Senai Airport terminal structure made people ponder upon the rhetorical question of what the future of the past will be. The dynamic team consisting of humble and amicable students shone in their daring decision to keep their design fairly simple yet aesthetically pleasing and somewhat feasible in terms of cost-effectiveness by employing repeated triangular-like structures of the steel roofs. In terms of functionality in its bid to be more environmentally friendly, the team made sure to include interactive first and second floors, with its steel-supported triangular roof-cum-wall structure designed to emit natural daylight. Apart from making the most out of natural daylight, the structure also sandwiches layers of ACP (aluminum composite panels) in order for the structure to bear minimal weight, and thus, sustain the land in which the structure is based at. Indeed, bringing home the winning prize of RM10, 000 courtesy of CIDB Malaysia, this “home-away-from-home” concept proved to have played to their advantage in this competition, especially since the team strongly preached the importance of preserving the beautiful Malaysian culture as a way to move forwards into the future.

The second place winners of the 12th OIC this year went to Team RT 0011 from Universiti Sains Malaysia (“USM”). Toying with a structural steel theme of Neo-Intricate Bone, this team managed to gain the judge’s attention to their innovative yet highly aesthetical reimagined expansion of the existing Penang International Airport terminal structure. Their innovation of having soundproof resting pods, as well as reimagined transports that could transfer passengers directly to the parking spaces in order to avoid overcrowding proved to be a selling point for their design structure as they brought home their winning prize of RM 7, 000 courtesy of AME Engineering Industries Sd. Bhd. On the other hand, Team RT 0004, which is also from USM, managed to bag the third place position with a winning prize of RM 5, 000 courtesy of Bina Puri Holdings Berhad. Inspired by the stalactite and stalagmite of Gua Tempurung, the reimagined design structure of the Sultan Azlan Shah Airport in Ipoh by Team 0004 was praised for their well-done concept. Meanwhile, consolation prizes were given out to Team RT 0022, also of USM, as well as Team RT 0023 of UTM each for their achievement in getting into the Top 5. Needless to say, the competitors for the next OIC event are in dire need to step up their game in order to reach greater heights.

All in all, the 12th MSSA/CIDB Students’ Open Ideas Competition ended with a bang. It is with high hopes that more architecture and civil engineering students will get involved with this competition for years to come. 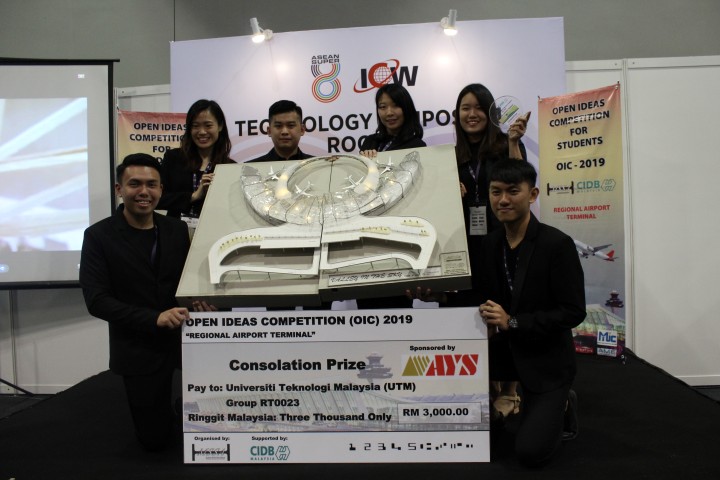 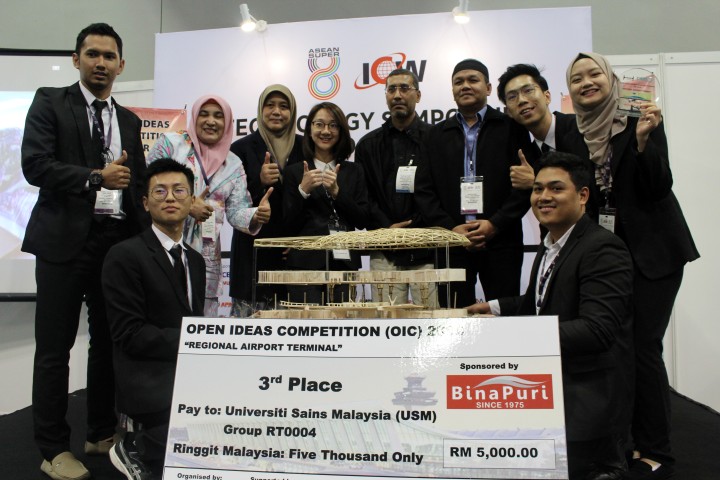 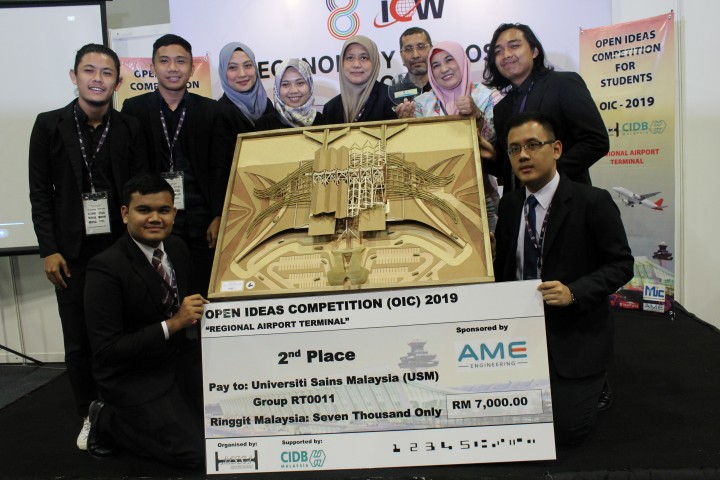 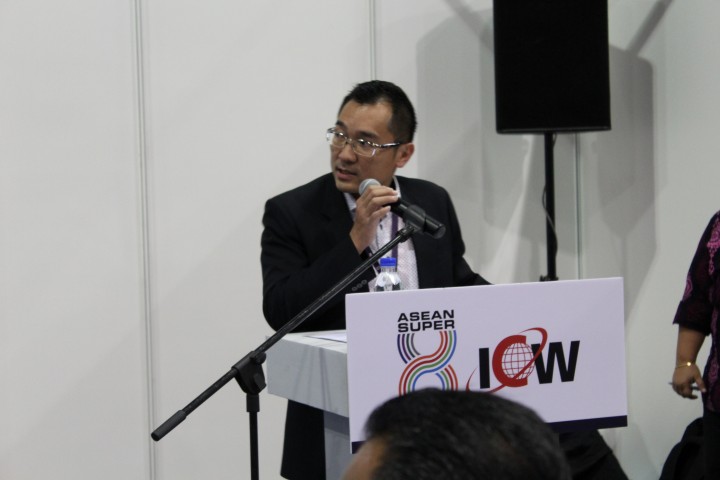 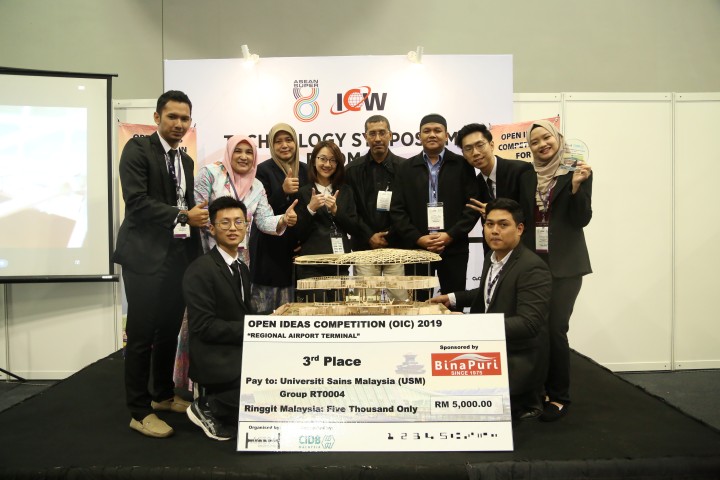 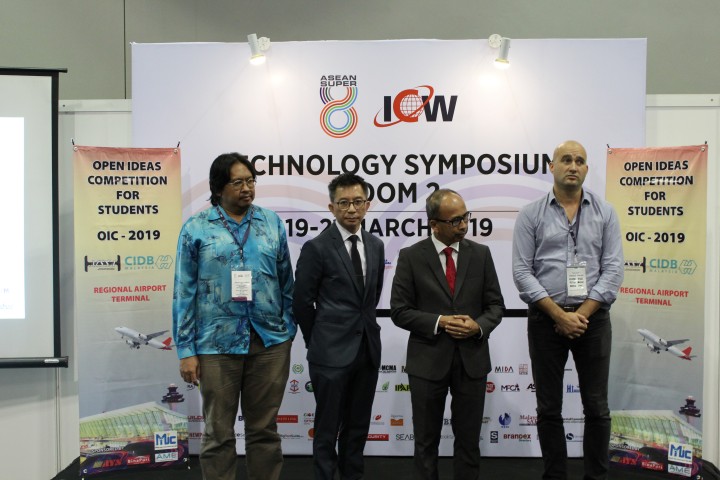 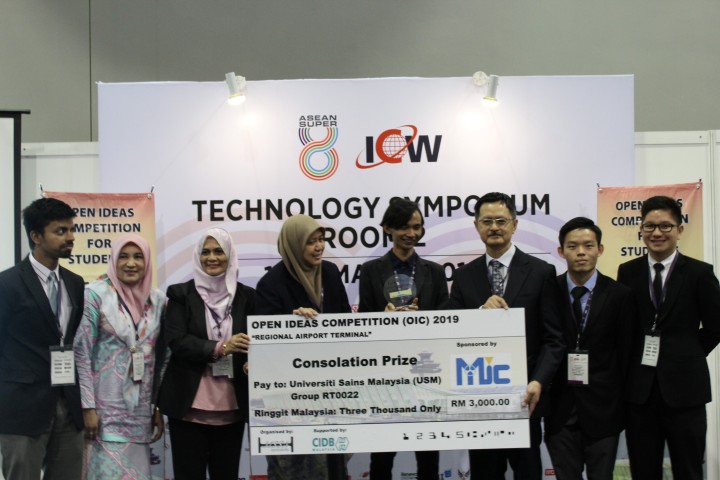 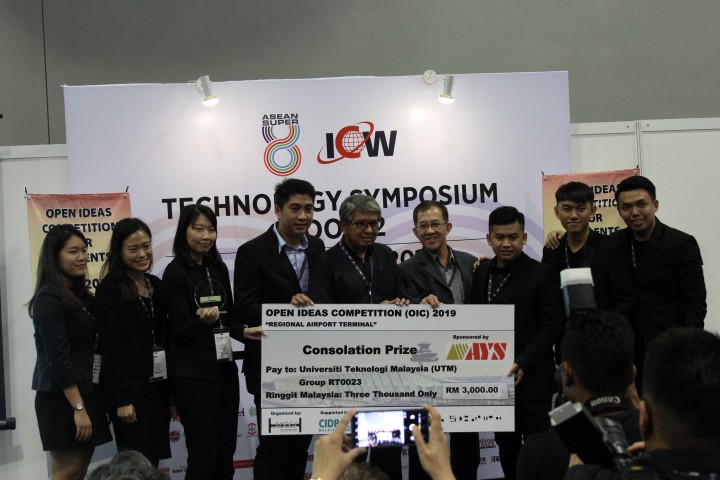 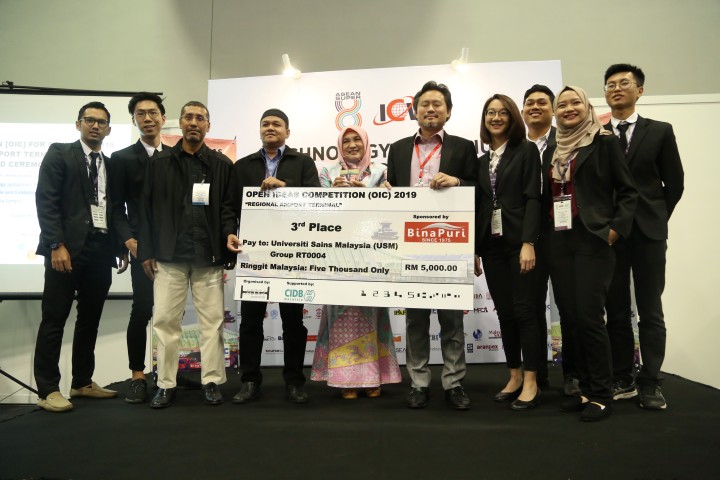 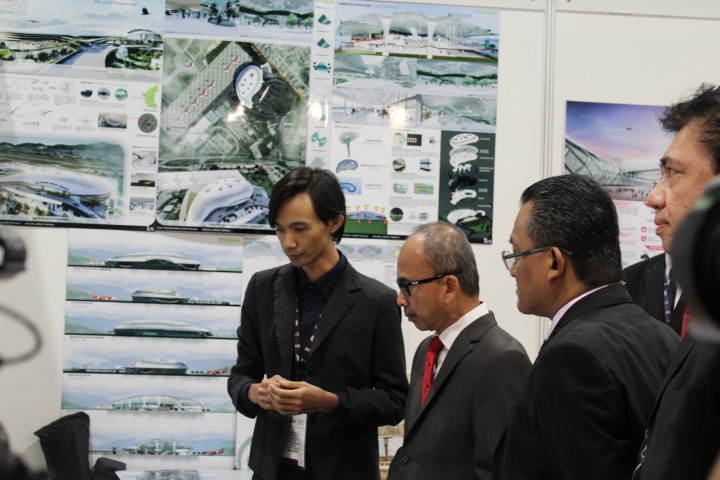 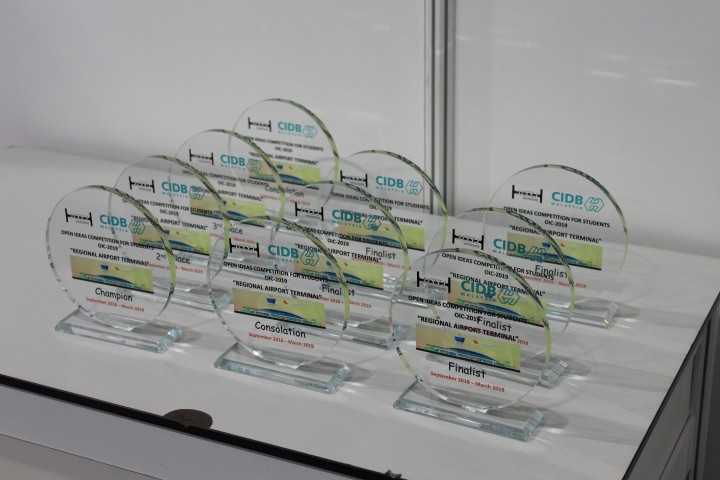 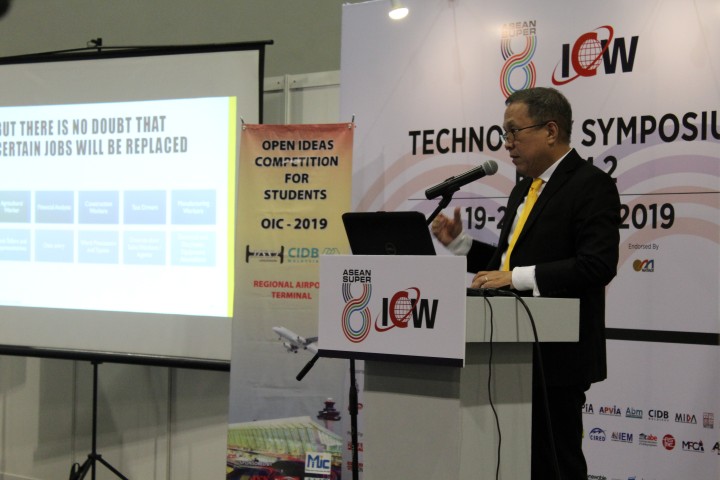 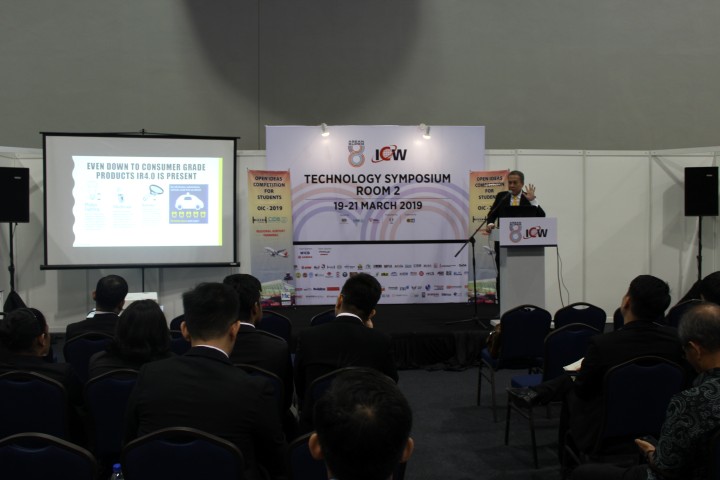 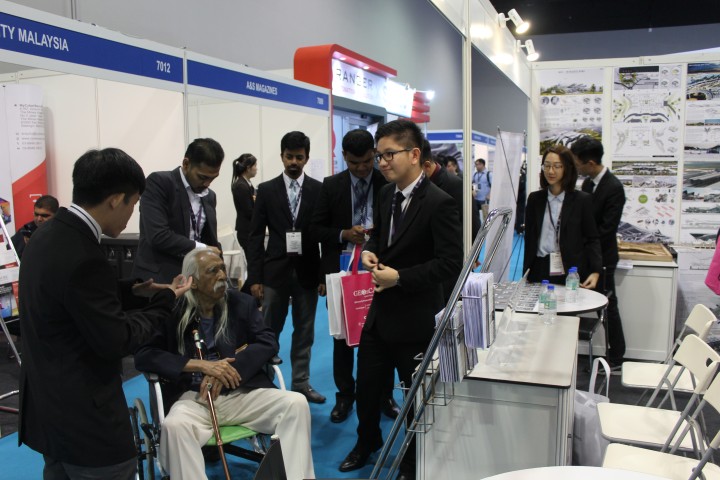